A survey by Lloyds Banking Group suggests young people feel they aren’t getting the boost they need from internships.

Young people feel increasingly sceptical about the value of internships as the majority of them still carry out menial tasks such as tea-making and picking up lunch for their bosses.

According to a survey, only half of 18-30 years olds believe their skills are taken into consideration when completing a summer internship.

Over 53 per cent of young people said they spent the majority of internships printing and photocopying documents, whilst over a third said most of their day is spent making tea and picking up lunch.

David Rowsell, head of education and employability programmes for Lloyds Banking Group said: “This research highlights how important it is to tailor internships to meet young people’s needs so they can use the experience to strengthen their skills, abilities and ultimately boost their employability.”

The findings suggest young people feel internships help companies more than they help themselves, but Seamus Nevin, head of employment and skills policy at the Institute of Directors, said he still considers internships and work experience to be “an advantage when hiring graduates or school leavers for permanent roles”.

He added: “Quality internships can be very beneficial to career development, offering young people to the opportunity to see for themselves what the workplace is like and test their interests in new areas.”

Reforms to internships in the UK have stuttered in recent years. Calls for legislation to ban unpaid internships were blocked by Tory backbenchers in 2016.

At the time, Conservative MP Margot James said reforming unpaid internships would have “unintended consequences” on firms leading to a reduction of internship roles. 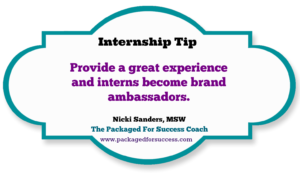