This news of the way Etsy changed its internship program saddens me.  A well-planned internship program can be an asset to your business – a part of your capacity building plan, corporate social responsibility plan, or employee engagement plan. I believe there was a better way. Read the article below and share your thoughts.

With two weeks’ notice, college students don’t have much time to find a new gig.

The online marketplace Etsy Inc., well-known for its quaint perks and under pressure to cut costs and boost its stock price, is taking an ax to its intern program.

Two weeks before they were scheduled to start their internships, college students were told their roles were no longer available, people with knowledge of the conversations said.

Activist investors, including Black-and-White Capital LP, which owns about 2 percent of the shares, want Etsy to trim what they see as wasteful spending, step up sales growth, and raise its flagging shares. Etsy offers a generous parental leave policy, meal plans, and a luxury Brooklyn office complete with a community loom. In its first day listed on the Nasdaq, in April 2015, Etsy’s market value doubled, to more than $3 billion. The shares are now down 16 percent from their initial public offering price.

“We are … troubled by what appears to be a lack of cost discipline at the Company,” Black-and-White wrote in a March 13 letter to the board. “It is clear to us, as it should be to the Board, that the Company’s bloated general and administrative expenses must be addressed.” Etsy laid off about 8 percent of its staff this spring and ousted Chief Executive Officer Chad Dickerson.

Now the platform for artisanal crafts and vintage curios has revoked most of the internship offers it made to college students last fall, retaining only a handful of computer engineering interns, according to a representative of Etsy.

The spokesperson confirmed that the intern program had been substantially scaled back but didn’t say why such short notice was given or why the interns had been assured of their roles just a few weeks before the offers were rescinded. Black-and-White didn’t respond to a request for comment.

In early May, after Etsy missed analyst estimates for its first quarter, a recruitment manager for the company described earnings day as “a bit of a whirlwind” in an email to an accepted intern. The email, which Bloomberg reviewed, said neither the layoffs nor Dickerson’s ouster would affect the interns. Another email, sent about a week later, confirmed that the internship was still on. That changed on Tuesday, according to the intern, whose offer was rescinded.

“They said that they were canceling the intern program in order to make budget cuts,” said the intern, who was to earn about $6,000 a month for the summer. The company clarified that the program wouldn’t be eliminated, in hopes it can be fully reinstated when Etsy is in a better position to offer it.

Etsy isn’t walking away from its disappointed summer staff altogether. The accepted intern, for example, was offered a one-time payment of $7,500, travel reimbursement, and the opportunity to stay in previously arranged housing. The company confirmed that it has extended the offer to other affected interns.

Beyond the financial hit, the intern is worried about losing a summer’s worth of job experience and about the scant time in which to find a new gig. In an effort to address those concerns, Etsy offered the accepted interns connections to other companies still hiring for internships.

“I’m not quite sure how the process will work or how quickly it will go,” the intern said. “They should have just canceled three weeks ago.” 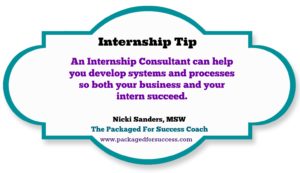