Another Successful Summer for the SHRM

2017 proved to be another great year for the SHRM/Congressional Hispanic Caucus Institute (CHCI) internship program. With a successful pilot year in the books for 2016, the program expanded from California to two additional states—Texas and Illinois.

For 2017, four interns completed summer internships at the Gaylord Texan Resort in Dallas, ITW in Chicago, the San Diego County Regional Airport Authority in San Diego, and SAG-AFTRA in Los Angeles. The interns were quickly integrated into their host company’s human resources departments and given hands-on experience in a variety of disciplines.

SHRM has worked with CHCI for more than 9 years and expanded the partnership in 2016 to include an HR internship program. CHCI works to develop the next generation of Hispanic leaders, and the SHRM/CHCI program is a natural fit to ensure that the talents and unique experiences of this demographic is represented in the field of HR.

All interns received mentoring from their host company supervisors as well as from their local SHRM chapters. “Principally, I connected with Lark Clement, the director of employee relations at SAG-AFTRA,” said Erika Enriquez Zamora. “To have Lark as a mentor and know that she is a resource for me in my future career, is a priceless and unexpected benefit that came with the SHRM/CHCI internship program.” Interns also received a scholarship from SHRM, SHRM student membership and exposure to HR programming and networking at the 2017 SHRM Annual Conference & Exposition.

Not only did the students find tremendous value from the program, the host companies were thrilled with their candidates—with one host company currently working to hire its intern into a full-time position. Other host companies are using tools and products that the interns developed, including an intern handbook, HR procedure guide and a “people analytics” project.

“I highly encourage other students to apply to the CHCI program because not only does it provide experience, it also offers an insight into a potential market for future employment opportunities,” said intern Lesley Simental. The 2018 SHRM/CHCI internship program will begin accepting applications in late October with five internships available across the country. 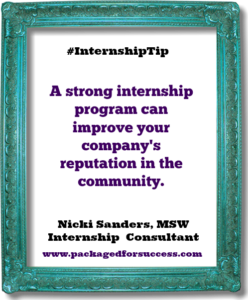