Her mother said, “Well, then, if you want to buy things, you should know how all of this works. Let’s figure out a way for you to earn some money.”

Having “failed” to learn how to get her way by whining, Kelli jumped right into learning about ways to earn money.

She chose to sell “GRIT” magazines, wherein you actually had to buy the “good news” magazines by the bundle and try to sell them at a profit.

(Personal note: While successfully growing and managing an afternoon newspaper delivery route in my neighborhood between the ages of 12 and 15, I lost money on “GRIT.” It was a hard sell.)

She made money, encountering only one setback when she overestimated the magazine’s popularity by ordering three bundles. Her mom let Kelli learn from her mistakes.

Imagine the shock of a local store owner when 7 year-old Kelli walked up to the counter to pay for a diary with her own check.

The store owner called her mother, who replied, “Did Kelli fill in the check correctly?”

“Yes,” answered the owner of the store.

“Then you have no problem,” Kelli’s mom responded. “It is her checking account.”

Kelli learned early on how to balance a checkbook and maintain personal finances. Could you even imagine a mother today allowing this whole concept of a 7-year-old delivering magazines on her bicycle once a week, collecting money, managing a checking account and paying taxes?

Of course not. How illiberal!

Today, Kelli owns a successful business and her adult children are entrepreneurs as well.

Government has guaranteed there will be far fewer Kelli’s in the future. Labor laws are now so draconian that today such a magazine company could be prosecuted for violating child labor laws, and the Division of Family Services would swoop down upon her mother… especially for allowing her to ride her bike to deliver magazines, even if Mom did follow her in the family car.

Jay wanted to work in radio. He got a part-time job at a local station and kept his foot in the door by hanging out and volunteering to carry, clean and help out with whatever was needed … for free.

He learned more about broadcasting this way than he could ever learn in a classroom or from paying a broadcasting school thousands of dollars that he doesn’t have.

Jay is now a young, successful radio station program director with his eye on a great future.

The Department of Labor now outlaws Jay’s industrial spirit and would certainly prosecute his mentor’s company into submission to central planning (D.C.).

The Big Government concept is to “protect” people like Jay from being “used” by presumably nefarious private enterprise.

And that’s a shame.

Even worse is the Obama Administration ruling on internships that forces even small businesses to pay students instead of simply exchanging learning in a real-world working environment for school credits.

Sure, some studies suggest paid interns have a better chance of getting hired, but studies over the past couple of years show a majority of industries cutting back intern opportunities dramatically as President Obama made interning for school credit a bureaucratic mess.

How much can an intern really learn if one of the requirements in the intern program is that “The employer that provides the training derives no immediate advantage from the activities of the intern; and on occasion its operations may actually be impeded; “?

Yes, we’ll train you how to run this control board, but in no way will we allow you to put your hands on it for fear that’s perceived as the company deriving an advantage from this training.

And just like Obama’s student loan forgiveness program, there is always the exception for the government:

So Obama’s interns don’t get paid AND they can be canned if they take an outside job.

Talk about “elitism.” Who could afford such “opportunities” except rich kids? 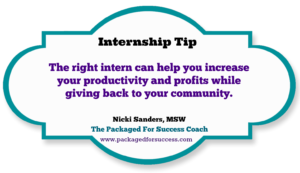