Internships Are Not a Privilege

TALENT is equally distributed, but opportunity is not. And while many Americans believe fervently and faithfully in expanding opportunity, America’s internship-industrial complex does just the opposite.

As the summer internship season gets into full swing, consider, for instance, how a plum internship may alter a young person’s career trajectory. While some students take a summer job in food service to pay the bills, others can afford to accept unpaid jobs at high-profile organizations, setting them on a more lucrative path.

I remember my own paid internships with fondness and gratitude, especially my formative experience working for the Texas Legislature. As a low-income kid from a small town who entered college without an extended network, my internships equipped me with the skills, confidence and relationships to channel my potential into a rewarding career.

And whether it’s an internship, college admission or any of the many other factors that determine a successful life, leaders who say they want to address inequality actually — and often unconsciously — reinforce the dynamics that create inequality in their own lives.

Even when financial considerations are no object, networking — the role of parents and others in helping young people score internships — disadvantages students from places that are underrepresented in positions of leadership.

We often hear that success is “all about the people you know” — as if it’s just a matter of equal-opportunity relationship building. We rarely talk about how one knows them, or about the privilege that has become a prerequisite to knowing the right people. I sometimes get calls and emails from friends seeking help in landing internships for their children. I understand what they’re doing; this is part of being a parent. Still, it’s a reminder that America’s current internship system, in which contacts and money matter more than talent, contributes to an economy in which access and opportunity go to the people who already have the most of both.

The stakes of America’s broken internship system are high. As report after report reminds us, this generation of students faces significantly worse job prospects than its predecessors. Without the short-term opportunities to help them learn, grow, connect with mentors and begin climbing the earnings curve, many promising young people with limited means are denied the chance to rise as high as their talent will take them.

The result is not limited to the labor market. The broader implication is privilege multiplied by privilege, a compounding effect prejudiced against students who come from working-class or lower-income circumstances. By shutting out these students from entry-level experiences in certain fields, entire sectors engineer long-term deficits of much-needed talent and perspective. In other words, we’re all paying the price for unpaid internships.

Fortunately, there is another option. Many organizations are beginning to pay interns. This is important because employers should not only compensate students for their time and contributions, but also eliminate barriers that prevent low-income and underrepresented students from pursuing these opportunities.

While some nonprofits may be unable to pay their interns — even though they depend on their contributions of energy and know-how — the government can help turn unpaid positions into paid opportunities for those at risk of getting left behind.

A few years ago, researchers at the Economic Policy Institute and Demos proposed using existing student aid programs — including Federal Work-Study and the Free Application for Federal Student Aid — to facilitate internship grants for low-income students. Their proposed Student Opportunity Program would provide funding equal to $3,500 for three-month grants and $7,000 for six-month grants to students who couldn’t afford to work without compensation.

At the same time, while compensating interns is necessary, it is not sufficient.

At the Ford Foundation, we take seriously the responsibility to ensure our paid internships help dismantle privilege. In addition to screening for strong academic performance and an interest in social justice issues, our managers require that interns be recipients of needs-based financial aid. In this way, we offer sought-after positions to young people who otherwise might not have the chance to pursue them.

The right internship can put a young person onto a trajectory for success. This is precisely why those of us who oversee internship programs ought to make sure they provide a hand up to all people of promise, not merely a handout that, best intentions aside, accelerates a cycle of privilege and reward.

For countless Americans, me among them, internships have provided a foothold on the path to the American dream. Simply by making them more accessible to all, we can narrow the inequality gap while widening the circle of opportunity, long after the summer ends. 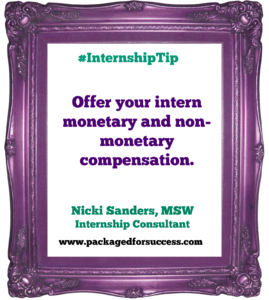