Horndog CEO’s online shaming of intern could cost him $2.4M

The disgraced financier signed a contract agreeing to pay former intern Hanna Bouveng $10,000 for every tweet he writes bad-mouthing her and another $50,000 for each time he tries to communicate with her, court papers show.

Now Bouveng — who was awarded $5.6 million after suing the CEO for pressuring her into sex and firing her when she refused his advances — says Wey violated that pact with dozens of trash-talking postings.

In a memo filed in Manhattan federal court last week, lawyers for the pretty Swedish brunette said they want Wey to put his money where his potty mouth is and cough up the dough.

The lawyers didn’t say which postings they objected to, but Wey, a self-described “investigative journalist,” has blasted Bouveng on Twitter as a “homewrecker,” “cocaine user” and “failed extortionist.”

The contract came together shortly after Bouveng’s explosive lawsuit in July 2014.

In an effort to shame Bouveng, Wey posted pictures of her on Facebook “accompanied by stock photos containing explicit pornographic images and images of individuals doing drugs,” wrote her lawyers, Benedict Morelli and Perry Fallick.

Wey creeped out Bouveng by showing up at a cafe in her hometown in Sweden while she was there. He also attempted to question her 19-year-old cousin at a bar, according to her lawyers.

Bouveng initially sought a court-ordered injunction to stop Wey from harassing her. He agreed to stop, the contract shows.

Wey’s lawyer, Glenn Colton, did not return a request for comment. He is expected to file an objection to the $2.4 million lawsuit request Tuesday, court papers show.

Bouveng hasn’t been the only thorn in Wey’s side. He was arrested last year and charged with conspiracy, securities fraud and wire fraud tied to an alleged scheme to reap tens of millions of dollars through stock manipulation of Chinese companies.

Wey, his company and his wife, Michaela, were also accused of fraud and stock manipulation in a civil lawsuit filed by the Securities and Exchange Commission. 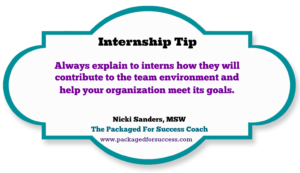 Nicki Sanders, The Packaged For Success Coach, is an Adjunct Professor with an extensive background in developing and managing internship programs. She is a skilled program manager, coach, trainer, and group facilitator who has packaged her Masters of Social Work degree and 20 years of work experience into Packaged For Success, a full service training and professional development company.