Low income students find working for free is not an option

With internships more important now than ever, employers increasingly search for recruits with these experiences on their resume. Many of these positions offer no compensation, but what does this mean for students who can’t afford to work for free?

Junior Jamie Ramos pays for her education and other expenses without help from family. She has passed up and even avoided applying for many internships offering little to no pay. Before this past summer, she always had to return to her Florida hometown and work a normal summer job.

“I’ve gotten positions, but if it doesn’t pay me enough, I can’t do it, and it’s really frustrating,” the Carolina Covenant scholar said. “I wouldn’t even think of applying for an unpaid internship — like I know I wouldn’t be able to do it, so I at least try for the paid and see if I can work something out, but it doesn’t work out.”

Before the 1990s, internships were more rare. The U.S. Department of Labor does not publish data on interns, but today an estimated 70 to 75 percent of college students at four-year institutions complete at least one internship before graduation according to Ross Perlin’s “Intern Nation.” Perlin estimates about half of them to be unpaid.

This past summer, Ramos finally found an environmental internship program in California that covered all her travel and living expenses. Before her acceptance into the program, Ramos could not obtain internship stipends through UNC because they were so competitive.

“They say there’s all these opportunities on campus to help you subsidize it, but they’re so competitive, and it’s so hard to go through the process of getting it approved that I’ve never been able to do it,” Ramos said.

Sophomore Olivia Sedita found it difficult to receive UNC internship grants as well. Although she receives financial aid — a qualification for many internship stipends through UNC — she was not offered a grant for this past summer, so she had to turn down a prestigious unpaid internship in Chicago.

“I can’t afford to run a $5,000 deficit,” Sedita said. “It’s not even like I’m not making money — I would be losing thousands of dollars, and I had to exclude myself from those opportunities solely based on the fact that I wasn’t getting money from them or from UNC.”

Instead, she took an internship in her hometown in New York, but it didn’t provide compensation. She worked a second job to cover her transportation expenses, pushing her to a total of 65 hours a week between her internship and job.

A 2012 study by the Intern Bridge reported 75 percent of students in unpaid internships work a second job. Like Sedita, sophomore Karley Wheeler is one of those students.

“I’m fortunate to have a family that could allow me to work in the family business to support doing this unpaid internship,” Wheeler said. “But I would have had to get a job, like a full-time job over the summer, if that wasn’t the situation.”

Senior Tori Wentz required two grants from UNC and a grant from Northwestern University to cover the expenses of interning last summer in Chicago. She said she couldn’t have done the internship without the grants.

“If I didn’t receive a grant, there was no way I was going to go because taking out a loan to work for free wasn’t an option,” Wentz said.

In the spring of 2017, Wentz participated in the Honors Seminar on Public Policy and Global Affairs in Washington, D.C., which required her to participate in a governmental internship. Her position did not pay.

The laws guiding unpaid internships generally do not require many government agencies or nonprofits to pay their interns. Even many federal government internships do not provide a wage — White House interns are historically unpaid.

The U.S. Department of Labor lays out six guidelines that for-profit employers must follow if they do not pay their interns. The main principal behind the law is how the intern should reap the benefits of the experience.

University Career Services Director Gary Miller said some for-profit employers who don’t follow these guidelines still do not pay their interns, and worries that unpaid internships exclude low-income or middle class students while privileging students who can afford to work without pay.

“I think that can be problematic for a lot of students and certainly students who have financial concerns — I mean honestly who can spend a significant amount of time and not make money?” Miller said. “That’s my big concern — equity, access.”

Sedita said she saw evidence last summer of how unpaid internships can exclude low-income or minority students. There was a significant lack of racial and economic diversity in the law internship program she participated in.

“All the interns who I worked with were very, very similar demographics to me — middle class, white, went to schools that were comparable levels to UNC,” Sedita said.

Jay Eubank, director of career services for the School of Media and Journalism, said he thinks unpaid internships can limit media workplace diversity since they cater to affluent students. This lack of diversity can hurt the business model of the media organization.

“If I am writing for a newspaper or magazine or online site, then my audience is not just typically well-off people — it’s everybody,” Eubanks said. “If I’m doing public relations and advertising, I’m trying to reach not just well-off people — I want to reach everybody. If you have more people’s diverse viewpoints, then that just seems like that’s going to be a much better business model to have.”

Miller said this job offer trend is due to the kinds of employers for which these students interned, not just the qualifications of the students.

“It’s not so much that a student is better positioned to get a job because they had a paid internship, but more it’s sort of an indicator of, ‘I’m working in a large enough industry and company that can both pay for my internship and also potentially hire me right after graduation,’” Miller said.

“I think internships — unpaid — are helpful in terms of getting work experience, but I think there’s a real inequality built in here because there are certain people who can afford to take unpaid internships and there are many, many more who cannot,” Kalleberg said. 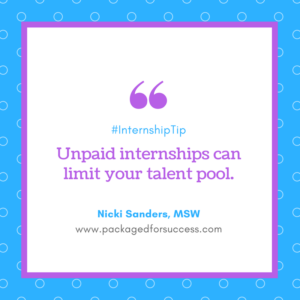