Want more journalists of color? Help pay for their internships.

Internship season — that fall push for applications that often separate the folks working in media from the people with media-related degrees — is now upon us, and with it comes an inflection point.

If we want more journalists from diverse backgrounds in our newsrooms, we have to pay to get them there.

About half of employers with internship opportunities offer college credit rather than hourly wages, said Jean-Marie Brown, an assistant professor of practice in the journalism department at Texas Christian University. If students are at a flat-rate tuition institution, this isn’t a problem during the school year.

“But in the summer, a student is effectively being asked to pay to work, because the only way you can earn internship credit is to be enrolled in internship class,” said Brown, who also serves as the department’s internship coordinator. “This puts some students at a disadvantage.”

Those students, in my experience, are usually people of color and economically disadvantaged Whites. I’ve suggested students apply for specific internship opportunities more times than I can count, only to cringe with recognition when they say they can’t afford to take unpaid work. A few weeks ago, I felt the enthusiasm of nearly 50 juniors, seniors and graduate students extinguish almost immediately when an alumna recruiting for a local public radio station concluded her pitch by admitting the internships were unpaid.

It’s one of those problems that makes the ongoing struggle to promote diversity in journalism so disheartening. But a question came to me a few weeks ago as I listened to pledge drives and read through an alumni engagement brochure from my alma mater: How might micro-grants give more students the opportunity to break into the industry?

According to the National Center for Education statistics, in 2014, 83 percent of students at public, four-year universities received some type of financial aid. If so many students need help paying for classes, room and board, they certainly can’t be expected to pay for the privilege of gaining work experience, too.

Many of my students at the University of North Texas rely on multiple summer jobs to afford tuition and related expenses during the year. The long-term investment of an unpaid internship simply isn’t feasible.

Yes, the industry should realize that having an inclusive workforce is essential to improving its bottom line. Unfortunately, most outlets are simply focusing on the bottom line — and not the socio-economic reality of the workforce that contributes to it.

But a part of that gap could be addressed through creative solutions from alumni and other stakeholders. Support for travel, room and board in the form of small donations from a number of alumni could be enough to allow at least a few students to consider internships they might otherwise pass up.

Nolan D. McCaskill, a breaking news reporter at Politico, is an example of the difference a stipend can make.

In 2010, as a student in Florida A&M’s School of Journalism & Graphic Design, he won a classroom award for his writing abilities, and was encouraged to work in student media, where he picked up copy editing skills and reporting experience.

He was the kind of student friends in the industry call me about when they’re looking for interns or early career hires — curious and driven with the required basic skill set.

“My first internship was in 2012,” McCaskill said. “I went home that summer and talked to a friend who was interning with a magazine, and I ended up doing some volunteer copy editing for them.”

Being at home meant basic expenses were covered; so he was free to take on unpaid work.

The internship was unpaid, but McCaskill got a stipend through the Scripps Howard Foundation, which covered a substantial amount.

Turns out, he could. Thanks to the paper’s assistance with identifying affordable housing at a nearby university, McCaskill’s small stipend stretched to cover room, board and basic reporting expenses. According to figures from the USDA, a “moderate” food budget for a young man his age was about $300 month. Gas prices ran close to $3 per gallon in summer 2014; the out-of-pocket cost later reimbursed by the company.

After meeting with Raleigh News & Observer Executive Editor John Drescher during the National Association of Black Journalists’ 2013 convention — held in Orlando, a 60-minute drive from McCaskill’s hometown of Ocala — he landed a second internship with the McClatchy paper*.

That $3,000 stipend helped make McCaskill one of the fortunate ones. It helped him bridge student media experience and volunteer work with the kind of internship that gets noticed.

In her book “Pedigree: How Elite Students Get Elite Jobs,” Lauren A. Rivers explained how such social capital functions. Whether the applicant’s experience was a summer internship or a full-time job, “evaluators focused on the job’s prestige,” she wrote.

Rivers continued: “Prestige came in two forms: the category of employment and that of the specific employer.”

Arguably, McCaskill’s campus media work and volunteer copy editing at an Ocala magazine wouldn’t have been flagged as particularly prestigious. But a short stint at a large-circulation newspaper in a state capitol would have.

He traveled to Washington, D.C., after being selected for a week-long, all-expenses paid opportunity at Politico; an opportunity he landed in part because of his previous work experience. He’s been there ever since.

“The internship was something that turned into a job for me,” he said.

Diversity is an inside job, requiring both the industry and its veterans to make investments in promoting more inclusive newsrooms. I’m encouraged that in some cases, even a small amount can make a difference in promoting greater access to opportunities among students from diverse backgrounds.

McCaskill’s case is a special one, but it doesn’t have to be. On principle, what more students need is a bridge between opportunity and access — one that could be addressed through targeted micro-grants from alumni that meet outlets halfway.

Take the $3,000 that kept McCaskill afloat during the summer of 2015. If a school could secure, say, $100 each from 15 alumni, and that amount was matched by an outlet, the approach could promote a bit more flow into the newsroom “pipeline” and provide a student with the wages they need to live as they work to build a career.

As university homecomings near, coinciding with internship season, I encourage readers to consider making a specific donation to their alma maters to support student internships.

And yes, I’ll be counting my own pennies to take my own advice.

(*In the interest of full disclosure, I was an editor at the N&O during this time, and am FAMU J-school alumna. I met McCaskill during his first week of the N&O internship.) 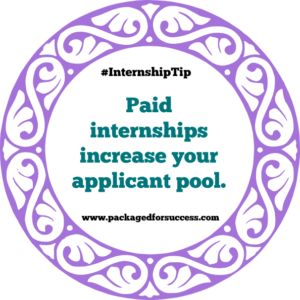