This Internship Program Only Hires Women Over 40

You’ve probably seen, or at least heard of, Nancy Meyer’s latest film The Intern. Starring Anne Hathaway and Robert DeNiro, it follows a 70-something man attempting to reenter the workforce. When the retired widower has difficulty finding employment, he opts for a senior internship at a digital fashion startup.

“That movie was kind of an aha moment for us,” explains Dara Kaplan, president and partner of a New York City-based p.r. firm called Wunderlich Kaplan Communications (WKC). “How many times have we witnessed our friends, unable to dive back into the workforce after several years at home? Women over 40 shouldn’t be cast aside for Millennials.”

Inspired, Kaplannull +0% and WKC’s CEO, Gwen Wunderlich, started The Enternship. The four week program, which launched this summer, aims to help women over 40 reenter the workforce by teaching them practical p.r. and digital communications skills. Eight interns in their 40s, 50s and 60s are currently participating, including a former CNN producer and a lawyer.  I caught up with the two leading women behind the initiative.

Kaplan: In one sentence, it’s a program to help women over 40. These women have either been bought out of their companies, chosen to jump the corporate ship or are looking to change careers and break back into the workforce. We teach them the skills they need during flexible hours. Millennial may be the buzz word du jour, but we happen not to agree.

What inspired you to start the program?

Wunderlich: We were tired of watching friends and family members get passed over for their younger counterparts or denied jobs because they have “too much” experience. We received more than 600 applications for the program, and the one thing every cover letter had in common was that they felt defeated. Ageism hurts, and these women feel like, “Am I worthless at 54? Am I over the hill at 52? Why will no one hire me?”

Who are your eight enterns?

Kaplan: We chose eight women, including a lawyer, a former CNN producer, a graphic designer and a stay-at-home mom. 99% are working moms and all are over age 40 (some are even over 60). And they are unbelievable. Take Ronni Berke, an award-winning veteran journalist and producer. She recently accepted a buyout from CNN to work on more creative projects and currently freelances as a communications strategist and content creator. She is an experienced media pro with years of experience in breaking news.

What kinds of skills do your enterns learn?

Wunderlich: Essentially, the ins and outs of public relations. We teach women how to create p.r. campaigns, write pitches and press releases, how to pitch media. There’s also hands on experience, like helping to run a party at one of our celebrity client’s house in the Hamptons. Working events helps them grow their network, which, as we all know, is what p.r. is about.

Kaplan: Social media is also explored, which we’ve found to be a major pain point for older women. They want to learn about blogging, vlogging and other emerging communication technologies — they just need a little guidance.

What is The Enternship’s ultimate goal?

Kaplan: To help women get back on their feet. It’s funny, because we’ve seen first hand what a bit of confidence can do. And while we hope to empower women to get back in the workforce, we also want to create a movement — an understanding of the value of women. We’re trying to urge other p.r. firms and female-owned businesses to hire talented, experienced women.

Wunderlich: It’s estimated that there are upwards of 3 million women with advanced college degrees trying to reenter the American workforce. It was clear this was who we needed to focus on.

Would you ever expand to men?

Wunderlich: Never say never, but our second Enternship training program, which starts in September, will also be focused on women. 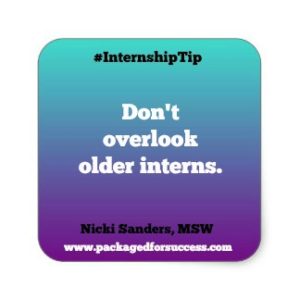