Unpaid Internships Are for the Privileged

By Vaishnavi Paudel, Opinion Writer for The Triton

Shrouded with malaise as I navigated to my first day at a new job, I nestled into my seat on the D.C. metro. The sea of newspaper-bearing, podcast-consuming young professionals ebbed and flowed before me at every stop. These patterns of commuters’ comings and goings offered me comfort in a place that otherwise felt entirely foreign.

Nearly every person of color in my train car exited at Federal Triangle. It was as though the conductor inhabited the body of a muezzin, crying out for the communion of not only Muslims, but of all people of color. No two people looked alike in the scene that colored the world outside the train’s window, but inside the train car, each stop closer to Capitol Hill resulted in an increasingly homogenous group of people – each of whom was unmistakably white. This felt like an unremarkable phenomenon in many ways —I dismissed my observation as statistically insignificant. Twenty years inhabiting brown skin renders you apathetic upon realization that you’re the only person with melanin in a white space.

I must admit, apathy doesn’t sit well with me.

Internships are a holy grail for high-achieving university students. Whether the intent behind taking on an internship is to assuage post-graduation anxiety, or to develop new skills through hands-on experience, internships have become an quiet marker of qualification on any competitive resume. The itch to secure this seemingly necessary qualification for employment isn’t baseless – in fact, research demonstrates that internships could prove to be more valuable than your GPA when searching for jobs.

The high demand for internships has prompted many employers to leverage student desperation in a grim job market by slashing, and in some cases, entirely eliminating monetary compensation for labor. Enter the unpaid internship.

While payment in the form of experience and letters of recommendation may be sufficient for unpaid interns, the majority of undergraduate students in the United States cannot afford such an enterprise. In fact “unpaid internship” is somewhat of a misnomer – not only do you fail to receive a paycheck, but you also often have to pay out-of-pocket for transportation, food, and housing.

For some students, including myself, the most significant cost manifests itself in the loss of time, which could have been spent breaking even by working a minimum wage job. In spite of the undisclosed costs associated with unpaid internships, nearly 46.5 percent of undergraduate college seniors who have had internships were not paid. Interns within the social science and humanities sectors, in fact, fare worse compared to their peers pursuing STEM fields. The paramount example of the lack of paid entry level opportunities is congressional internships, where only 10 percent of interns are paid for their work.

Me, the Unpaid Intern

Congressional interns lack diversity, in part, due to the limitations that unpaid internships pose to individuals with socioeconomic constraints. Joining the unpaid intern club required letting go of my two minimum wage jobs, and bidding farewell to what I considered a too-good-to-be-true, college-edition American Dream. Simply put, the dream of earning two incomes allowed me to avoid asking Yahoo Answers questions like, ‘How can I pay my bills with ‘experience?’ For some people, the answer is that you can’t.

Access to a congressional internship also often depends on a personal connection to a member of Congress. Thus, because Congress is disproportionately comprised of white males, interns with personal connections are also disproportionately white and male. Within the walls of the same institution that students of color rely on to protect their civil rights, congressional interns of color struggle to find coworkers who share their racial identities. Beyond demoralizing underrepresented interns of color, the lack of diversity creates another incarnation of institutionalized discrimination. Since congressional internship opportunities often open the doors for permanent employment, the underrepresentation of minorities poses a threat to the diversity of congressional staffers, and other members of government, as well.

In the world of policymaking, consequences of representation of race and gender within workplaces are especially grievous. People who have experienced firsthand the fear of being racially profiled when driving, the uncertainty of attending higher education due to legal limitations, or the anxiety of living check-by-check recognize these systemic issues. They are more likely to prioritize implementing policy changes that will support people who have faced challenges similar to their own. This issue extends far beyond diversity within offices of congressional staffers, as the policies that staffers introduce to their employers could ubiquitously impact people of color throughout our country.

The purpose of this article is not to generalize my experience to all students of color or to all students with financial constraints. It is simply to raise awareness that the lack of diversity within congressional staff is so apparent that I sense it every working day on Capitol Hill. While diversity initiatives to increase the accessibility of congressional internships for people of color exist, my discomfort should evidence that these programs do not produce adequate results when standing on their own.

Diversity initiatives cannot stand on their own if employers do not pay their interns. Pay your interns because it isn’t just a matter of compensating a recent college grad for a foot-in-the-door job. It’s more than that. It’s about offering equal opportunities and disbursing fair wages for legitimate labor. It’s about emphasizing diverse representation inside our offices, because diversity presents repercussions on policy priorities that affect the lives of people of color outside of our offices. Pay your congressional interns because employers need to level the playing field for students that are financially challenged. Pay students of color because our rich skin, our deep histories, and our incomparably complex minds are indispensable for a brighter future. 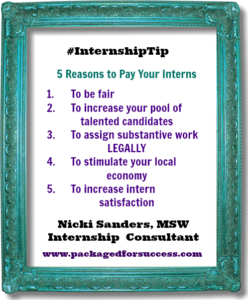