Yes, Ivanka Trump, Interns Should Get Paid. Here’s Why

Ivanka Trump recently tweeted advice from her (apparently) unpaid interns. Here’s why she should reconsider her position.

In the working world, an internship can be a remarkable learning opportunity, a great jump-start to a new career.

But should interns get paid?

That’s the question of the moment, courtesy of American businesswoman Ivanka

Trump. Last Friday, Ivanka shared an article on her official Twitter account, entitled: How to Survive as an Unpaid Intern.

The article was written by Quincy Bulin, a copy intern who works for IvankaTrump.com.

“With this being my third unpaid summer in New York City,” wrote Bulin, “I’ve learned a few tricks, as have the other interns at Ivanka Trump HQ.” Bulin and the other members of “Team Ivanka” shared tips that included saving up during the school year, setting a budget, and asking for a reimbursement for meals and travel.

Bulin’s comments indicate that she and her fellow interns don’t get paid for their work. Although the folks at IvankaTrump.com haven’t commented on the company’s wage policy regarding interns, chief brand officer Abigail Klem did make this statement (via email to The Huffington Post):

We strive to create a fulfilling learning opportunity tailored to the unique interests and career goals of each intern. It is our goal that at the end of the program, our interns leave with experiences that will help guide them into choosing a fulfilling career path.

(To be clear, this discussion is in no means politically motivated; I don’t support any of the candidates for the U.S. presidency. And the idea of not paying interns certainly doesn’t begin–or end–with Ms. Trump.)

The argument for paying interns

Anyone who watched Hollywood superstar Will Smith portray Chris Gardner in The Pursuit of Happyness knows that the right unpaid internship can lead to great opportunities.

Based on a true story, the film depicts how Gardner competed with a number of other unpaid interns for a coveted full-time position with Dean Witter Reynolds, an American stock brokerage and securities firm. Leveraging his skills and drive, Gardner not only won the job, he also went on to build his own multimillion-dollar brokerage firm.

But the story also reveals Gardner’s struggle to provide for himself and his young son during that time, at one point even ending up homeless. Gardner’s outcome is obviously an exception to the rule, which is what makes his story so remarkable.

Darren Walker, president of the Ford Foundation, put it well in a recent op-ed for The New York Times:

We often hear that success is “all about the people you know”–as if it’s just a matter of equal-opportunity relationship building. We rarely talk about how one knows them, or about the privilege that has become a prerequisite to knowing the right people. I sometimes get calls and emails from friends seeking help in landing internships for their children. I understand what they’re doing; this is part of being a parent. Still, it’s a reminder that America’s current internship system, in which contacts and money matter more than talent, contributes to an economy in which access and opportunity go to the people who already have the most of both.

“The broader implication,” continues Walker, “is privilege multiplied by privilege. … By shutting out these students from entry-level experiences in certain fields, entire sectors engineer long-term deficits of much-needed talent and perspective. In other words, we’re all paying the price for unpaid internships.”

These comments help explain why many view the advice that appeared on Ms. Trump’s website to be short-sighted and tone-deaf. Of course Ivanka can’t understand the plight of unpaid interns: She comes from a place of extreme privilege.

So, for business owners everywhere, please consider the following consequences of unpaid internships:

When companies offer unpaid internships with a view to finding potential hires, they unwittingly restrict themselves.

If the vast majority of people applying for unpaid internships are the ones who can afford to do so, much of the company’s future work force will be made up of people with very similar backgrounds and experiences, leading to limited perspectives and inevitable “groupthink.”

Think about it: If you were accepted to internships at two similar companies, one that provides some type of income and another that doesn’t, which would you choose?

Yes, this strategy may save a company money in the short-term. But it’s only a matter of time until top employees get poached by competitors who are willing to pay the price for top talent.

When it comes to for-profit companies, it’s important to realize that many internships are required by law to be paid positions. To do otherwise means fulfilling a number of strict criteria, and the law can get messy in this regard. So, not paying your interns just might lead to a major lawsuit.

How’s that for motivation?

I’m curious to hear from you all: Have you participated in an internship, paid or unpaid? Are you considering one now?

Would love to hear your experiences. 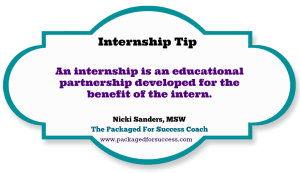