I’m pretty proud that this summer, I helped two interns on their way to building a profession for themselves.

Alex Mann is a journalism student at the University of Maryland, College Park. He’s from Gibson Island — meaning we didn’t have to explain to him where Glen Burnie is — and spent this summer working as a reporting intern in our newsroom.

Skyler Ballard is a photo journalism student at Western Kentucky University in Bowling Green. She’s from Bloomfield, Kentucky — meaning that I got to know her through my wife’s extended family connections in her home state — and has been working as a multimedia intern at the Alliance for the Chesapeake Bay.

Alex and Skyler never met this summer, yet they had remarkably similar things to say about their work.

Both dedicated their summers to work. Both wanted to learn what it takes to pursue their career goals. Both went way outside their comfort zones into first-time experiences.

Skyler had never been to Annapolis before arriving in June, knew nothing about the Chesapeake Bay or the complex issues facing those who live within its watershed. She got to do plenty she had never done before, from focusing on video production to traveling to far — often marshy — corners of the bay to document the work of the alliance.

She picked crabs for the first time and pronounced herself, ever so diplomatically, a fan of my crab dip recipe.

Alex pulled his first court documents, trying to grasp the details of criminal charges for a story. He covered his first school board meeting. He knocked on doors trying to find the human beings affected by a homicide.

He gamely drove to Cambridge with photographer Josh McKerrow, spent eight hours on an oyster planting barge and then drove back to Annapolis — all to help kick off our series, “Oysters on the Bay.”

Many in journalism consider internships to be the pinnacle of a solid education. Theoretical understanding of the skills involved in working for a news organization is an important foundation. Campus journalism is an excellent way to prepare for the workplace.

But hands-on experience in a setting where you can learn from editors, reporters, photographers and others involved in pulling together a story is the only way to answer this question: Is this job right for me?

We have a long history of working with colleges and professional organizations to provide jobs for interns. Rachael Pacella, who will take over covering schools and the Naval Academy for us later this month, is a former intern at The Capital. Danielle Ohl will join us at the same time as a new general assignment reporter, just after finishing an internship at The Baltimore Sun newsroom in Baltimore.

My profession is not alone in putting high value on internships. Historic Annapolis has several interns this summer. My daughter, a student at the University of Kentucky, has held internships in the Anne Arundel Cultural Resources Division and the Annapolis Historic Preservation Division.

My son, a physics student at the University of Maryland, has started searching for internships next summer that will give him exposure to particle research.

Over the years, we’ve developed some goals in working with interns.

We treat them like regular employees. They’re given a task, clear guidelines on what’s expected of them, the tools and support needed to accomplish that task, and feedback on what went right and wrong after it’s accomplished.

There are some precautions, of course. We understand that interns need more guidance than an experienced journalist. We try to pair them with members of our staff who have demonstrated a willingness and ability to lead both by example and explanation.

There also are some assignments we wouldn’t give an intern, news that requires more experience to report or something that another reporter or photographer has put time into developing.

If you don’t have an internship program at your workplace, I’d urge you to consider it. If you had an internship this summer, drop me an email to let me know how it went. I’ll share your story with readers.

Alex and Skyler wrapped up their jobs Friday. Good luck with whatever comes next, my young friends. Until we meet again. 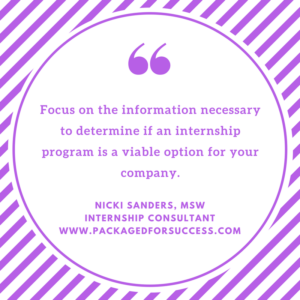