Interns Are Not Good Free Labor

Interns Are Not Good Free Labor

In fact, they’re more expensive than you think.

We recently did a quarterly review with our content interns and found that one piece took 3 x 8-hour days to write.

An editor, full-time staff, and the intern were involved over the course of three weeks, which made our intern’s piece more expensive than our in-house staff writers’ pieces. You’re probably asking, why did we hire him?
We didn’t just hire him. We paid him.

Our editor has worked with student volunteers and interns in Europe, Asia, and North America for nearly a decade. Even though our content team could do unpaid internship listings in university job boards, the team has chosen to allocate its budget to paid positions.

Most companies think that interns are cheap on-demand labour.

People often think of unpaid interns as a way to save money and time while getting the same results as a full-time staff. My company doesn’t look for cheap labour.

In the 200+ candidates I interview annually, I look for good team members, and as a small company, we can only attract talent by starting on the right foot from day one. That begins with managing our own expectations of university students.

Interns are not cheap labor. They are inexperienced labor.

Don’t expect your intern to arrive and know how to use everything from Mixpanel, Google Analytics, or best practices for Github workflow. My company’s interns are students and they joined our company to learn.

Even full-time hires take time to pick up the company’s tools and processes. If you aren’t paying them, you’re basically asking a volunteer to learn your way of doing things.

What do volunteers do? Probably take their time, especially if they’re thrown over the deep end without enough mentorship.

Of course, interns can contribute without prior experience. Their supervisor needs to design tasks that contribute to what the company is doing and manageable for the intern.

For our content team, this begins with research and editing pieces so that the team can learn about their working style, ability to lay out information, and analytical skills to assign more appropriate tasks.

Stop asking “Do you have any questions?” They won’t, and that’s bad.

We still do this all the time, throughout our teams. This question is not helpful because if the person knew there were gaps in an explanation, they’d probably have already started asking.

If they haven’t, they probably don’t know to ask. Usually, it’s experience that helps people look out for pitfalls. More experienced team members should be using their experience to think ahead and help guide the discussion.

If you think of interns as a pair of free hands, they won’t have incentive to use their heads.

If an intern doesn’t use their head, you’ll be spending most of your time cleaning up their work.

One of our colleagues began asking this instead: “How would you proceed to solve this?” Have someone walk you through their thought process before they head off to work.

The CVs I see from job applicants and struggles university graduates have during our technical tests are a constant reminder of the things I’ve taken for granted over the years.

Every internal “O….M….G…” facepalm moment comes with something else: a memory of having done the same thing about a decade ago, when I first started.

These things may sound like common sense, but they clearly weren’t to whomever didn’t do them. Many of them I learned on the job after I founded Oursky 9 years ago.

However, unlike me with my first paying client years ago, an unpaid intern might grow a bit tired of the endless list of requests if they feel they’re “just volunteering their time.”

In contrast, by paying our interns, we can set clear expectations for delivery similar to a client. Also, if each assigned task is an opportunity to grow, an intern will be just as motivated as any other team member to deliver.

Give a 2x buffer time.

When our content team first brought interns onboard, the average write time for pieces dropped from 1 week to 4 weeks. Why would we tolerate such a dramatic drop in write time at first?

The long-term investment to train our writing interns has paid off. Now the editorial team has 2 interns and 3 staff with part-time content commitments. The writing cycle takes about 2 weeks and our content team has been freed up to engage our developers for technical pieces as well.

Our editorial team still continues to write, but our staff can now focus on higher-level strategy as well. They also devote the time they used to spend writing to giving quality feedback for our interns to not only improve their pieces, but their decision making and strategies to tackle writing new topics.

If our company started by not paying, we are starting our relationship with a new team member with the wrong tone. Our company always has budget to hire a new full-time developer and we’ve been profitable for 9 years.

If we don’t pay, the indirect message is that we have chosen not to compensate them, and don’t value them. As a result, it would make sense for our unpaid intern to go for the next paid project that came around rather than stay with our company.

We don’t want that. We want them to look forward to coming to work.

What if you’re a cash-strapped startup or NGO? No amount of company perks replaces hard cash. Start with transportation and lunch money, so that at least the intern isn’t subsidizing your operations by forking out their own expenses.

If it’s a fixed project, set money aside as a transparent lump sum so that the intern knows what they’re agreeing to. Start where you can and think actively about giving a little more because if you are on the look-out for your team members, they’ll look out for the company.

Our company generally pays hourly because we prefer long-term relationships with our interns.

What do coffee runs say about you?

In a small and growing company, there are a million things to be done?—?including errands. But executing daily coffee and stationary runs is not an employable skill for your intern.

It reflects on how well your company manages its time and how it perceives team members. At Oursky, it’s usually our coffee-loving staff who make pour-over coffee for anyone who wants to drink (including interns).

And does that mean interns shouldn’t do grunt work? No. Our company has a flat structure. Any intern can contribute ideas to a project that are judged on their own merit, our full-time staff and partners are also just as likely to do lunch take-out runs.

One easy principle is that you can ask an intern to do anything you would do, which includes carrying water packs. Sometimes, stuff just needs to be done and that’s a worthwhile learning, too.

Get off your high horse.

And lastly, interns can blow you away with their experience and performance. One of Oursky’s interns got a 37% download conversion when he was tasked with A/B testing our Shotbot site, and another developed a Go demo game when he was writing documentation for our open-source serverless platform, Skygear.io.

Another former intern specializes in hardware and was already contributing to as a student and one of our content interns had 10k followers and was a paid influencer.

Many millennials have a lot of experience.

Companies can be too eager to leverage an intern’s assets and too quick to look down on their inexperience in other areas.

While we only pick a handful of interns a year, we also recognize that they probably also chose our company at below market rate. If my company wants to keep accomplished and talented people, our hiring team members have to hold up their end of the bargain and give a worthwhile experience.

Why hire interns at all?

Please don’t if you’re not willing to pay or put in some work.

Having a team requires a supervisor to be on top of their game. If one of our team members cannot prepare materials before a meeting, we can hardly expect our interns to do extra for us.

If one of our developers cannot be a tech lead when a student intern is stuck on a side project, we shouldn’t be assigning them to it.

The simple “yes” answer for taking on interns is that it’s a long-term investment in talent. We screen hundreds of developers before we hire one, and we have similar challenges hiring sales and content team members.

Whether it’s Facebook or a cash-strapped startup, scouting for talent and finding the right fit always seems too long for a position that needs to be urgently filled.

However, if we can bring on promising students early on and help them grow throughout the year, we are screening them on the job rather than taking time out to go to recruitment events.

The quality of internships we provide for young people sets the standard of employable people we have to choose from.

An intern who decides to go full-time is easier to teach than an experienced hire who may be more set in their ways. Even if an intern leaves after the internship, they are also good sources to refer talent to the company.

Some of our developers also return a few years later with even more experience to bring back.

So what happened to this Oursky writing intern? He’s still with us, and since that performance review, he’s clear on the company standards for copy and turn-over speed. When we first hired our interns, the monthly blog post output remained the same as when we had one part-time writer.

Half a year later, without adding any more headcount, our content team now has 20+ pieces in the pipeline per month.

Not only have our interns contributed monthly pieces, they have freed up our staff to do more integrated content campaigns. There’s a place for everyone to grow in the workplace as long as the role is designed for them to succeed and, in the process, contribute to the company. 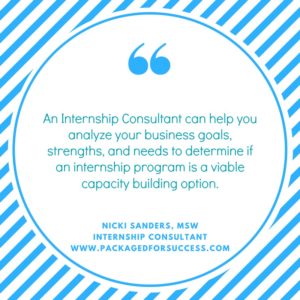