Business leaders say robust programs are a good way to attract and retain skilled workers – plus they don’t leave the state after they graduate.

Luis Paniagua was a summer intern at Wex Inc. in South Portland after his senior year at Bowdoin College. He has since been hired full-time as a treasury analyst. “Wex was a good fit, and I wanted to stay in Maine,” he said. Staff photo by Derek Davis

It is a common refrain that young people in Maine can’t wait to leave the state after they graduate from college.

But that simply isn’t true, according to major employers in Maine who are grooming tomorrow’s workforce through corporate internship programs.

Companies such as Wex Inc., Idexx Laboratories Inc. and L.L. Bean Inc. receive thousands of applications each year from college students hoping to establish a career in Maine after graduation. Some employers have formalized or expanded their internship programs recently to help recruit more workers in high-demand technical fields such as science, technology and engineering.

Wex, a payment-processing technology firm based in South Portland, created a formal summer internship program for the first time this year, with guidance from economic development group FocusMaine. The response from college students was overwhelming.

“We had just over 1,300 students applying for 32 positions,” said Brigitte Emmons-Touchette, the company’s director of global talent acquisition.

At the end of the summer, Wex offered permanent, full-time jobs to five of the 18 interns who were approaching graduation. All five accepted, Emmons-Touchette said.

One of those former interns is 23-year-old Luis Paniagua, a recent Bowdoin College graduate who is now a treasury analyst at Wex.

Paniagua is from Las Vegas, and he ended up at Bowdoin through the typical college application process. He applied to many schools, received multiple offers, and chose the one that best aligned with his educational goals.

Paniagua, who majored in economics, said representatives of Wex visited the campus during his senior year to recruit summer interns. He was impressed with the company’s growth rate, the benefits it offered to interns, and the possibility of landing a permanent job with Wex when the internship was over.

“Wex was a good fit, and I wanted to stay in Maine,” Paniagua said. “Specifically in Portland, Maine.”

He said the internship further solidified his interest in the company because Wex immediately had him doing real, meaningful work.

“Part of the reason I really liked Wex was because, off the bat, I was already assisting with implementing a new management system,” Paniagua said. The internship also gave him opportunities to participate in charitable work and meet face-to-face with top executives, he said.

FocusMaine, a collaborative of Maine business leaders focused on improving the state’s economy, believes internship programs are an important tool for workforce development. The group recently issued a set of guidelines for companies to follow in order to ensure they and their interns get the most out of such programs.

FocusMaine launched a pilot program over the summer in collaboration with several major employers in the state, including Wex, Idexx, L.L. Bean, Eastern Maine Health Care, Unum and MaineHealth. It involved over 260 interns enrolled in programs that follow the FocusMaine guidelines, which include paying interns at least the minimum wage and providing them with challenging, project-based work assignments.

“These companies would not have just naturally come together and started working together,” said Andrea Cianchette-Maker, co-chair of FocusMaine and a partner at the Portland law firm Pierce Atwood. “It’s one of the strengths of FocusMaine.”

Cianchette-Maker said it’s a fact that internships often lead to full-time employment. The goal of the FocusMaine pilot project was to maximize the benefits of internship programs to interns, employers and the Maine economy.

“The hope is that this gets rolled out statewide,” she said.

Another company that has developed a more formal internship program over the past few years is Freeport-based retailer L.L. Bean. Over the past summer, the company received about 400 applications from college students for 50 available internships, said Sarah Cox, the company’s vice president of human resources.

Five years ago, there was no formalized internship program at L.L. Bean and the company only hosted 10 or fewer interns each summer, she said.

Cox said L.L. Bean is on board with the theory that stronger internship programs will help to create a more robust talent pool in the state. The company has hosted about 170 interns over the past five years, 22 of whom it subsequently hired as regular employees.

“It’s a natural thing to develop as we think about the increasing competition for great talent in the region,” she said about the internship program. “It’s part of remaining competitive.”

‘A WAR FOR TALENT’

One local company that has been serious about internships for years is Westbrook-based Idexx, which produces a variety of diagnostic testing equipment for the veterinary industry.

“We have about a 15 percent conversion rate (from internships to employment),” she said. “That’s pretty high by industry standards.”

Leonard said Idexx receives thousands of applications for internships each year. At least 75 percent of those are from Maine students, she said.

Quality internships are a way to boost the number of qualified candidates for hard-to-fill jobs, Leonard said. Positive word-of-mouth even drives college graduates who did not intern at Idexx to apply, she said.

“There’s a war for talent. There are just too few workers to fill the jobs that are needed today,” Leonard said. “We are actually developing our talent pool within the state of Maine.”

One former Idexx intern now employed by the company is University of Southern Maine graduate Emily Donovan, an automation engineer.

Donovan said that when she was enrolled in the mechanical engineering department at USM, other students who had interned at Idexx told her about their positive experiences. When she learned that Idexx was offering an internship in her specific field of study, she applied, did not get chosen, applied again the following year, and finally was granted an internship.

Donovan’s internship involved working with a group of process and automation engineers in Idexx’s operations engineering group. She worked on a specific project to design, build and test a new piece of equipment that was needed for research and development. At the end of the internship, she was asked to give a presentation about the project at a symposium for interns.

“Every day was different and brought new and exciting challenges and learning opportunities,” Donovan said. “I was able to apply what I was learning in school and get hands-on experience.” 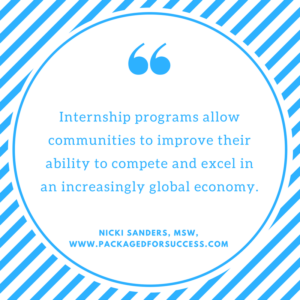